Worth Brewing Company in Northwood, Iowa is a pioneer in a now rapidly exploding nano and micro-brewing industry. Co-owner Peter Ausenhus began his brewing career at Summit Brewing Company in Minneapolis, one of the Midwest’s early microbrewers. Peter became inspired by the great tradition of locally owned brewers serving hand-crafted, high quality, distinctive beers. The nation’s small and mid-sized towns were once dotted with such breweries. He started looking for an opportunity to build his own tradition.

Co-owner and Peter’s spouse Margaret Bishop’s love for old buildings brought their vision to Northwood in Worth County Iowa. Margaret and Peter found a historic Main Street building in the brick 1886 Worth County State Bank Building. Margaret managed a loving restoration for the building in the Northwood Central Avenue Historic District. Among many preserved and restored details, the original teller cage was transformed into a unique bar front. It became the perfect first home for Peter’s traditional hand-brewing. Worth Brewing opened in 2007 as the first independent brewery in North Iowa in several generations. Worth Brewing brings a bit of those historic days back to the delight of the growing number of those who appreciate locally brewed beers. Worth Brewing’s brand promise blends traditional brewing with a love for historic architecture.

In the beginning, Peter brewed in the renovated turn-of-the-last-century storefront, while Margaret operated her consulting engineering practice from the upstairs offices and helped with the brewery on nights and weekends. Active in the Iowa Brewers Guild and Brewer’s Association, Peter and Margaret accumulated accolades and an outsize reputation for excellence. A knack for guerrilla marketing helped. Iowa Public Television’s Simple Pleasures highlighted Worth Brewing. They were featured in a national foodie magazine, Food and Wine, as Iowa’s outstanding nano brewery. These are just a couple of examples that led Iowa’s tiniest brewery to gain a national reputation from rural, small town Iowa.

While working with the NIACC Pappajohn Center and the Small Business Development Center (SBDC), Worth Brewing built a track record of business growth and profitability. Then North Iowa SBDC Director, Ted Bair brought his own experience as a successful beer distributor to the business counseling relationship. Sales and profits had seemingly reached a ceiling. For sales and profits to grow the owners knew they would have to broaden their business model to include outside distribution and in-house special events. The current brewing system and building were just too small. While cities in a 60-mile radius courted Worth Brewing to move, Peter and Margaret looked for options locally and sought the advice of the experts at the SBDC.

It was a complex challenge with many moving and interconnected parts.

Preserving the Past while Building the Future
Finding a suitable building was the biggest challenge. The ideal solution of an immediately adjacent building wasn’t available. New construction was considered, but ultimately rejected as inconsistent with the Worth Brewing brand. Plans progressed in fits and bits. The Pappajohn Center and SBDC helped the Worth Brewing team apply the best lean startup techniques to test various options. The Pappajohn Center and SBDC collected key market trend research and Peter and Margaret put it into context with feedback from fellow brewers that built successful expansions in other similarly situated markets.

Margaret decided to focus exclusively on building an expanded Worth Brewing. That led to the sale of her professional engineering practice. The Pappajohn Center and SBDC contributed advice on marketing, valuation and negotiation. The money from the engineering practice would be one of the key sources of new cash into the expansion. Banks don’t do one-hundred percent financing. Investors like owners who are investing their own money in the deal. They attracted a key outside investor with industry experience for another slice of the financing puzzle. 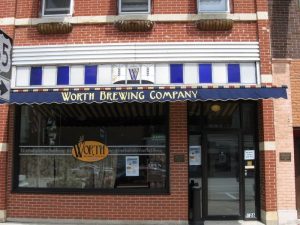 The problem finding suitable space in Northwood led to consideration of other alternatives. Other communities courted Peter and Margaret seeking a destination brewery for their economic development. Northwood is a county seat but only has a population of 2,000. Sustaining vibrant main streets is a common challenge for rural communities. Worth Brewing is an attractive destination anchor tenant that brings in traffic from a much wider regional customer base. The Pappajohn Center and SBDC helped consider options with complex financial modeling to allow apples-to-apples comparison of alternative offers.

Just when it seemed a move out of Northwood might be necessary; even inevitable, local development leadership stepped up with a perfect solution. It had been staring Peter and Margaret in the face for ten years. The Northwood Economic Development Corporation arranged the purchase and participated in the financing of a building immediately across the street from the original Worth Brewing home. It was the mostly vacant 1896 International Order of Odd Fellows (IOOF)-Erickson building. Time for another historic renovation project to become the new and enlarged home for Worth Brewing.

This two-story brick structure in the Italianate style was designed by J.L. Rood of St. Paul, who had also designed the nearby Worth County Courthouse. When the rehabilitation project started, the building was vacant—one side having been empty for 6 years. The roof and non-historic storefront was replaced to prevent further water infiltration and damage. Many original elements were saved and restored, including the metal cornice. Those surfaces were scraped, cleaned and painted.

Worth Brewing Company converted the first floor of the Erickson Building into the brewery; the first floor of the Odd Fellows building into the brewery Tap Room, and the second level Odd Fellows hall into an event center space. On the interior, asbestos was professionally abated to expose the original wood flooring. 1980s infill partitions and drop ceilings were removed. The original wood bead board ceiling was uncovered and carefully restored. Additionally, The IOOF meeting hall’s tin ceiling and molding was restored. Other restored elements included two of the original entry doors, all of the original doors on the second level of the Odd Fellows and the c. 1940 windows and doors on the second level of the Erickson Building. Preservation Iowa.

The result won recognition as a 2016 “Preservation at Its Best” award winner. It’s a big deal for North Iowa. Governor Branstad, state economic development officials, and area elected officials came to tap a keg to first announce the expansion and then returned to help christen the new home.

The rehabbed building accommodates a new seven barrel brewing system, approximately a 20 fold increase in prior production capacity. It offers a much enlarged tap room. The upper level is the historic Bee Hive Ballroom and includes a modern catering kitchen that enables a unique venue for a wide array of events. Worth Brewing now has a much enlarged original business line (the retail taproom), and two entirely new business lines with the event venue and wholesale distribution. And the story of sales growth and profit growth continues.

Financing the expansion was possible because of all the homework in developing a proven business plan based in reality and not guesses. The work with the Pappajohn Center and North Iowa SBDC paid-off. Total project investment in the newly enlarged Worth Brewing building, equipment and business model exceeds $1 million.

The existence of a plan empowered Peter and Margaret to manage through the construction unknowns and move across the street.

The Pappajohn Center and North Iowa SBDC helped develop key strategic partnerships to pursue the planned growth. A key lesson for entrepreneurs is you don’t have to do everything, you just have to see that everything gets done. Distant distribution requires partners with experience and access to retail decision-makers. Kabrick Distributing of Mason City fit the bill. Peter and Margaret work with Kabrick for Iowa distribution outside of Worth County. Expansion into Minnesota is the next step on tap as Worth’s regional customer base includes many beer enthusiasts from the Albert Lea, Austin and Rochester areas.

The SBDC also helped establish a direct distribution relationship with another key regional tourist attraction, Diamond Jo Casino. Peter mastered all the technical details required to support the casino’s sophisticated, high volume supply system. Peter and Margaret also cleared the high bar of business requirements to become an approved supplier to the casino’s corporate parent. So much of the work behind business success is not obvious but necessary.

Worth Brewing Recognized at State Level for Excellence

Both Worth Brewing’s beer and new home continue to receive accolades. Peter Ausenhus and Margaret Bishop keep proving that great businesses are possible in rural Iowa. As the company likes to say, “If it’s not hand-crafted it’s not Worth Brewing.” The Pappajohn Center and North Iowa SBDC’s assistance is a key contributor to Worth’s success with over one hundred hours of counseling and work in the two years from conception to completion.

Peter Ausenhus and Margaret Bishop are the embodiment of the Iowa SBDC Neil Smith Entrepreneur of the Year’s search for outstanding business owners delivering a success story with the help of their regional SBDC. Northwood has multiple restored historic buildings thanks to the Worth Brewing team. Northwood enjoys the tourism and entertainment magnet of an outstanding microbrewery. Worth Brewing added space and employees including a new Retail Manager, Tyler Trenhaile. The NIACC Pappajohn Center and its North Iowa SBDC, led by Director, Brook Boehmler helped deliver a historic win for Northwood. Worth Brewing laid the groundwork for a dramatic expansion in volume and market reach, including interstate commerce. Worth Brewing illustrates the teamwork required for success in major projects with close work with Northwood city officials and Northwood Economic Development Corporation (EDC). Northwood City Administrator Amber Julseth and then Northwood Mayor, Jane Bloomingdale (and now newly elected State Representative), helped pull together the local support. The EDC and City were indispensable partners in financing the project and enabling Worth Brewing to continue to grow in their hometown. Peter and Margaret’s vision and energy are the direction and power behind the Worth Brewing’s success story. The dramatic results illustrate how important the allies you collect along the way are for ultimate business success. It’s not who you know. It’s who you get to know.

Northwood and North Iowa are fortunate to have gotten to know Peter Ausenhus and Margaret Bishop, co-owners of Worth Brewing and nominees for the 2016 Iowa SBDC Neal Smith Entrepreneur of the Year Award.